The Gould Piano Trio, directly compared to the great Beaux Arts Trio for their ‘musical fire’ and ‘dedication to the genre’ in the Washington Post, have remained at the forefront of the international chamber music scene for a quarter of a century. Launched by their first prize at the Melbourne Chamber Music Competition, they were ‘ECHO Rising Stars’, making a highly successful debut at the Weill Recital Hall in New York’s Carnegie Hall, and described by Strad Magazine as ‘Pure Gould’.

Commissioning and performing new works is an important part of the trio’s philosophy of staying creative and freshly inspired. Sir James MacMillan’s 2nd Piano Trio was written for them in 2014 and premiered at the Bath International Festival that season. 2017 featured the Goulds in the Hull ‘City of Culture’ celebration, performing former BBC Young Musician, Mark Simpson’s ‘After Avedon’ as part of the PRS ‘New Music Biennial’.

The annual Corbridge Chamber Music Festival, presented by the trio together with clarinetist Robert Plane, celebrated its 20th Anniversary with a commission from Huw Watkins – his ‘Four Fables’. It is scored for clarinet and piano trio, an instrumentation made famous by Messiaen in his ‘Quartet for the End of Time’ which also forms part of their discography with Plane.

The Gould Trio’s extensive tours of N. America, the Far East, New Zealand, and Europe are interspersed with masterclasses to nurture the next generation, at institutions such as the Guildhall School in London, the Britten-Pears Young Artist Programme at Snape and Dartington Summer School.

In addition to their highly praised recordings of the standard works, the trio have thrown light on neglected gems from the late romantic British repertoire with recordings for Naxos and Chandos, including C.V. Stanford’s and John Ireland’s piano trios, plus works by Bax, Milford, York Bowen and Cyril Scott. Just released is a recording entitled ‘Stolen Airs’ of music by Northumbrian composer John Casken, including his piano trio and ‘Shadowed Pieces’ for violin and piano. Future plans include a recording on Resonus Classics of American twentieth century works: the somewhat French inspired piano trios of Amy Beach and Rebecca Clarke together with Charles Ives’ trio – a vivid and distorted reimagining of his own East Coast popular culture.

The Gould’s festival appearances in 2020 include ‘Fables and Fugues’ at Lake District Summer Music in August – a presentation for piano trio, clarinet and solo dancer (Kenji Wilkie), which combines a choreographed performance of Huw Watkins ‘Four Fables’ with extracts from Bach’s ‘Art of Fugue’. The trio begin 2020 with a tour of America’s Pacific Northwest.

WINTER 2019 (473 words) NOT TO BE ALTERED WITHOUT PERMISSION 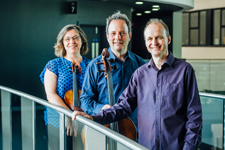