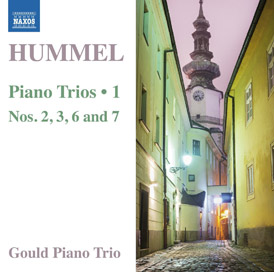 Lucy studied at the Royal Academy of Music and Indiana University, Bloomington, with Gyorgy Pauk and Josef Gingold. Courses at Prussia Cove, Yale Summer School and the Banff Centre for the Arts, working with Andras Schiff, Menahem Pressler and the Amadeus String Quartet were a great inspiration to her.

In chamber music she is best known as violinist of the Gould Piano Trio, one of the UK’s most prestigious ensembles. From early success at the Charles Hennen in Holland and the inaugural Melbourne Competitions and shortlisted for the Royal Philharmonic Society Chamber Award, the Trio now boast an impressive discography, with festival appearances at Edinburgh, Cheltenham, City of London, Bath, Aldeburgh, Spoleto and the BBC Proms. Regular and extensive tours to the United States have covered major venues in New York, including the Lincoln Center, Frick Collection and Weill Hall, and in Europe highlights have included the Queen’s Hall Edinburgh, Amsterdam Concertgebouw and the Brussels Palais des Beaux Arts, as well as recitals in Paris, Cologne, Athens and Vienna, and regular performances at London’s Wigmore Hall.

Lucy also performs regularly with Leon McCawley and David Pyatt, taking the opportunity to explore both the horn trio and violin sonata repertoire.

She has performed much of the concerto repertoire with orchestras such as the BBC National Orchestra of Wales, Bournemouth Sinfonietta and the English String Orchestra. She regularly appears as guest leader of orchestras such as CBSO, BBC Philharmonic and BBC NOW. She holds the position of principal 2nd violin of the Chamber Orchestra of Europe and is a teacher at the Royal Welsh College of Music and Drama in Cardiff, where she lives with her husband, Robert Plane, clarinettist and their three children.

previous next
The Gould Piano Trio © (2023)
Website by Webnificat.