Wwritten in response to the tragic and deeply-felt death of his friend and mentor Nikolai Rubinstein, Tchaikovsky’s A minor Piano Trio represents his only foray into a genre that he had previous found undesirable. Writing in tribute to Rubinstein yielded a massive, elegiac first movement and a lighter but hardly frivolous set of eleven variations, each of which represents a memory of Rubinstein’s life. The elegiac style for piano trios caught on quickly among Russian composers; the young Rachmaninov produced two such works, the first of which — a soulful, one-movement work — is heard on this album. Performing on this Champs Hill Records album is the Gould Piano Concerto. The ensemble not only plays with meticulous technical skill, pristine intonation, and close attention to details in the score, but they also manage to put forth convincing, engaging performances of compositions that can all too often become overwrought and even sappy. Instead of using excessive amounts of rubato, the Gould Trio uses a broad dynamic range to shape phrases and accentuate highlights.

With its epic sweep and passages of intoxicating virtuosity, Tchaikovsky’s Piano Trio seems the ideal work for high profile soloists wishing to perform chamber music. The catalogue boasts many recordings featuring an all-star cast, the most recent of which from Lang Lang, Vadim Repin and Mischa Maisky on DG received a strong endorsement in these pages (Christmas issue, 2009). Yet even greater dividends can accrue from performances given by long-established chamber ensembles that have grappled with the work’s many interpretative challenges, not least unifying its sprawling design.

Such qualities are very much to the fore in this beautifully recorded performance from the Gould Piano Trio. Its players follow the composer’s directions to the letter, bringing a natural flow to the various difficult changes in tempo in the first movement and mapping its emotional narrative most convincingly. Likewise they bring freshness, panache, charm and infinite variety to the second movement variations. Highlights include a brilliantly characterised fugue and the ensuing impressionistic Andante flebile introversion from the opening of the piece. In the finale, Benjamin Frith impressively negotiates Tchaikovsky’s full-blooded piano writing without coarsening the tone.

It is all too easy for these two piano trios to get bogged down in sentiment and density of texture, but the Gould finds a way of keeping the fabric transparent and airy while maintaining the elegiac tone that governs both of them. Rachmaninoff clearly had Tchaikovsky’s trio of 1881-2 as a model when he wrote his first, single-movement Trio élégiaque a decade later, and they make a persuasive coupling in performances of taste and sincere passion.

… these performances are polished, nicely blended and heartfelt. It would be difficult to imagine more robust, sensitive and responsive playing of these Late-Romantic works.  Rachmaninov’s brief but haunting single-movement Trio élégiaque No. 1 is pure rapture in the hands of the Gould Piano Trio. 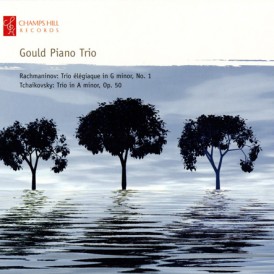