If your musical tastes err towards the sunny, optimistic and playful rather than the heavyweight, gloomy and probing, let me direct you to the (seven) piano trios of Hummel. This second volume from the Gould Trio takes us from the late 1790s to about 1814. Within the first eight bars of Op 12, we have been taken to a happy place, the musical language clearly a continuation of the classical tradition inherited from Hummel’s teacher, Mozart, but no mere birthday present to him or Haydn. The heart-easing theme with its lightly worn counterpoint is as inspired and skilfully wrought as anything they wrote and, Hummel being a virtuoso pianist, with far more demanding keyboard parts. This is especially true of the last work here, subtitled Grand Trio concertante and dedicated to his friend Johann Baptist Cramer, ‘a concerto in all but name’ (Keith Anderson’s fine booklet-note). The syncopated main theme of the final rondo (maddeningly catchy) is the sort of thing Herz or Kalkbrenner would dream up a few years later.

So – music well worth befriending (it is a pleasure to listen to all three three movement works without a break), especially in such lively company. In terms of other intégrales, Lucy Gould (violin), Alice Neary (cello) and Benjamin Frith (piano) are clearly preferable to the heavy-handed Borodin Trio (Chandos), Frith in particular dancing his way with palpable pleasure through the many pages of non-stop allegro vivace and presto semiquavers. Well recorded, too; but I retain a marginal preference for my benchmark: the Trio Parnassus (recorded 1987/88) have a better string-and-piano integration, observe more acutely than the Gould Trio Hummel’s dynamic markings and inject the feel of a live performance into the playing (I give you the coda of Op 83). Still, at Naxos’s price, I guarantee you won’t be disappointed. 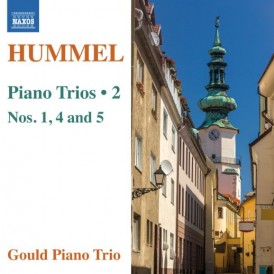 previous next
The Gould Piano Trio © (2020)
Website by Webnificat.